A Deep Dive into Some Core Principles of Successful Website Design

The editors of UnmatchedStyle.com will be here to present a deep dive into some core principles of successful website design. We’ll look at aspects of what makes a user interface work (or not) and investigate ways to increase conversion rates. We’ll also gain insight from lessons learned reviewing thousands of websites on Unmatchedstyle.com.

by Giovanni DiFeterici
Giovanni will discuss the inherent symbolic nature of UI elements, how people interact with them in relation to their real world analogs, and how to build a description of an element’s function into its visual presentation. Understanding how people think about the interactive visuals that we build can help us design more cleanly and to speak more clearly to our users.

by Gene Crawford
Your web app’s sign-up experience or the call-to-action better be top-notch. People have short attention spans and take no mercy when passing judgement on your service or products. We’ll be looking at some best practices and review great examples that demonstrate what goes into a solid sign-up experience. We’ll also get into some psychology, design patterns & reviews.

Mobile Apps are sweeping the internet and bringing powerful change to all levels of life experience.  This new internet marketplace gives rise to creative practices which will have far-reaching economic, social, political and cultural benefits.

Habitat Tracker – Dr. Ian Douglas, FSU-College of Communications & Information
Habitat Tracker draws upon more than a decade of prior research on mobile computing in museums to design and  develop a learning system based on the use of digital journals before,  during, and after field trips to wildlife centers. The project team will  develop a digital journaling device that small groups of school  children working as teams will use to collect data as they walk a  wildlife trail at the museum. This device, the Habitat Tracker Journal,  will help students create digital records of their visits that will then  be accessible online using a corresponding Habitat Tracker Website.  Classrooms of students will use these systems, in school and in the  museum, to develop their own questions about the nature of science, and  access multimedia content and expert commentary about natural habitats,  while recording their own observations and answering their own questions  about the wildlife they observe, before, during, and after field trips  to the wildlife center.
Web site: http://tracker.cci.fsu.edu/project/

Model UN App – Farhood Basiri, Bellwether Inc.
The Model UN App for iPhone is the single best source of easy-to-access information for MUN participants. Users can easily access a trove of resources and documents: search or browse the entire CIA World Factbook, access live UN News, and scour through hundreds of NGOs.  Model UN is available to download FOR FREE until February 16, so you can check it out before or right after the event ! ! ! !
http://modelunitednations.org/

Come join us for another evening of inspiration and insight as we host Rob Milstead and Michael Leonard of Sapient’s Atlanta office. The presentation will include a general market overview of what SapientNitro (the customer experience, advertising, and marketing division of Sapient) is seeing and a few case studies detailing what they’re doing with digital display and display merchandising.

About our guests…
Rob Milstead is a Director in Sapient’s Atlanta office and is responsible for SapientNitro’s accounts in the Southeast. Most importantly he is a ‘Nole with degrees in music and communication.

Cost: $10 ($5 for AAFT members) The meeting is a joint venture between Refresh Tallahassee and the American Advertising Federation Tallahassee

Please RSPV on our Meetup site

About Shane Santiago
SBS Studios founder, Shane Santiago, is a Florida native who grew up in Jacksonville Beach. He attended the University of Florida and received his Bachelor of Science in Advertising, and a diploma in Marketing Communications from the International Advertising Association (IAA).

Shane then tackled some of world’s largest brands at global advertising agency Ogilvy & Mather New York, as an art director working on IBM, Jaguar, Sears, Golf Digest, Kraft, and Perrier, to name a few. He then traveled to Baltimore, and after honing his craft on several interactive-based clientele at various ad agencies, Shane landed in Washington, DC and was named Vice President, Interactive Director at GMMB, an Omnicom-owned issue-and-cause-based marketing and communications firm. Having built the entire interactive capability at GMMB from the ground up, Shane worked with clients such as the Save Darfur Coalition, Association of American Medical Colleges, the Robert Wood Johnson Foundation, the Bill and Melinda Gates Foundation, and the Obama for America campaign.

Shane is now focusing his attention on having SBS Studios leverage its “Madison Avenue” experience for businesses of all sizes, across multiple verticals and help them redefine creativity online. SBS Studios has recently worked with brands such as Comcast, Axe, Friendly’s, Sony Pictures, Paramount Pictures, The American Advertising Federation, The Ad Council, and more.

How to Design Web Apps People Love: An evening with Kevin Hale

As a part of the Wufoo team, Kevin Hale is no stranger to creating wonderful web apps. In his presentation, Kevin will be showing how to focus on user interaction in order to create an experience that users will love.

UPDATE: Join us from 5:30 on for pre-meeting cocktails at Versailles (located next to 101 Restaurant & Lounge, directly across from the Challenger Learning Center).

About Our Speaker:
Kevin Hale is the co-founder of Infinity Box, Inc., a company seeded by Y Combinator. He is responsible for safe guarding the user experience of the Wufoo application and designing every pixel of its interface. As much as Kevin likes keeping things clean and reliable, he loves innovation. He writes about interface design issues for the web development blog, Particletree and served as editor-in-chief of the web development magazine, Treehouse. As a child, Kevin was the kid in class who ate a box of crayons for a dollar.

And a Word of Appreciation
Special thanks to Alan Hanstein at Paragon New Media and Darren Allen at White Dog Design Group for helping sponsor and coordinate our meeting!

The mind behind UXBooth.com uses Photoshop to deconstruct some of the most common UI effects from scratch to add greater depth and realism to your work.

About Andrew: Hailing from the great city of Atlanta, GA, Andrew Maier designs interactions and user experiences for a variety of clients. He writes, speaks, and teaches about design and its intersection with the internet. In addition he serves as the editor–in–chief of the user experience blog, UX Booth. When he’s not crazy busy, Andrew likes singing, practicing yoga and drinking coffee, like a good little hippie should. 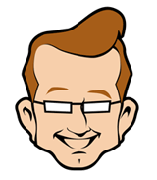 Come join us on Thursday, February 18th at 6:30 PM at The Zimmerman Agency for our next meeting. Our host and guest speaker for the evening will be Carl Smith, the founder of nGen Works in Jacksonville. Here’s a taste of the evening (borrowed from the Atlanta Web Design Group’s post):

People often talk about usability and learnability when discussing web and application development. Things have to be intuitive and familiar to increase conversions and trial… blah blah blah. All of this is really important. But what does it really boil down to?

In his presentation Carl will break down key steps to understanding, building and keeping trust with your users. More than that you’ll get to hear from real users what they think when you break that trust. Ouch!

Special Thanks to Alan Hanstein of Paragon New Media for the generous event sponsorship! Also, thanks also to Eric Thomas and the folks at Zimmerman for their continued support and hosting our event! Lastly, if you haven’t already done so, please help us plan by letting me know if you plan to attend! You can shoot me an email or give me a call at 850-212-4044.

Come join us on Friday, October 16th at 6:30 PM for our next meeting. Our host and guest speaker for the evening will be Michael Calienes, the founder of Transplant and the co-founder of The Conversation Factory. The gist of the discussion will revolve around "exploring the possibilities of non-traditional marketing strategies based on today’s ever-evolving media landscape" – which is what The Conversation Factory is all about.

Over the past 19 years, Michael has worked on virtually every communications medium imaginable in both English and Spanish languages. From direct mail and online for General Motors, Discovery Channel Latin America, and SOL Sotheby’s to print and television for Nextel and NorthernLight.com, he has helped clients craft their unique brand voice, and helped make their message stick. Michael’s work has been awarded locally, nationally, and internationally at Addys, Hatch, CMYK, Print Magazine, One Show, and the Webbys.

If you haven’t already done so, please help us plan by letting me know if you plan to attend! You can shoot me an email or give me a call at 850-212-4044. I want to make sure we have enough seats, snacks, and such. The office is located at 3033 Powell Road, Tallahassee, FL 32301 (The pin on the Google Map is a little off. It’s the last driveway as you head south on Powell, just before turning left onto Eliza Road. The office is in the building located in the back right corner.)

I posted the trailer for Art & Copy earlier this month, but I didn’t think it would make it to town. Thankfully, I was wrong. There will be screenings this weekend at the All Saints Cinema. Here are the details:

I was able to attend the inaugural Front-end Design Conference this past Friday down in St. Pete. For the most part, the presentations were excellent, and I highly recommend adding it to your calendar for next year – especially if the price stays at $99. In the meantime, PDF files of the presentations have been added to the conference site.